You are here: Home › Heroes › Media › Other › Trevor Kleinhans
← “Well, when I found out that I was HIV positive I literally heard white noise roaring in my ears…
“So one day, I simply opened my profile and changed the heading to: “HIV+ healthy man”. → 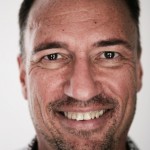 On the face of it – I am a regular South African Guy, but the way my story turned out is anything but regular.

My name is Trevor Kleinhans.  I was born in 1962, and I had made a success of my life.  In 2003 I was 41 years old and the Managing Director of a large listed Warehousing & Distribution Company.  I was successful and happy and I thought I had conquered life.

Then suddenly my life started going down hill at one hell of a pace.  I had recently formed a business partnership, and needed to go for blood tests for a large life insurance policy.  One of those was an HIV test.  And that test came back positive. I went straight into denial.  Followed closely by drug addiction.  Looking back on it now – I realize that part of my reaction was because of my past:  a childhood dominated by an alcoholic father and a sibling who had sexually molested me over a six-year period.  Two years of National Service in the apartheid era during which I witnessed horrific events in the townships.  And my experiences as a gay man in South Africa in the early 1980s, which had led to me being arrested, followed by a nine-year emotionally abusive relationship.   And I hadn’t dealt with any of it.

I felt HIV was my death sentence.  (Although my results were not reflecting that at all. My CD4 count was high and my viral load very low.)

This, together with my unresolved emotional baggage, and a mixed cocktail of drugs created a recipe for disaster.  Without realising it I had sub-consciously pressed the suicide button.

I did not share my HIV results with anyone at the time. I worried that I would be ostracised by the gay community, and that my status was too much of a burden for my family to deal with, so I internalised my illness and that was my biggest mistake.

A year of drug usage led me to almost losing everything I had ever worked for.  Including my life.  But one day, almost exactly a year after I was diagnosed:  I decided it was enough – I finally reached out for help and thanks to the amazing people I had surrounded myself with, including friends and family, I checked into rehab for crack cocaine addiction

Beating crack is no mean feat.  Only three out every 100 crack cocaine addicts triumph over their addiction:  but I had to believe that I could conquer this drug, I would be one of the 3%.

My councillors in rehab helped me to face my HIV status.  But still I was not ready to share it with anyone else.  They say in addiction circles that “you’re only as sick as your secrets” and this secret led to me relapsing and picking up the crack pipe again

In July 2005 I sought professional help from a Psychologist – and met with her regularly every week for five years. She helped me to come to terms with my past and with my current situation.  By now I was on ARV meds, but a very low dosage, from which I had no side effects. Slowly I started accepting my HIV status:  and I decided that the best way to handle disclosure was through Gaydar, a gay network website. So one day, I simply opened my profile and changed the heading to: “HIV+ healthy man”.   It was a big step.  I was not sure what the response would be, but to my astonishment, I started receiving messages from guys saying how brave I was in coming out with my status.

This gave me the courage to speak openly about my HIV at work and with friends. I started believing that if I got this burden off my chest and shared it with people: it would help me.  And it certainly did.

What I found works for me, is I do not “live” my HIV status on a daily basis.  I know I am living with HIV; but I try and not focus on it, focusing instead on leading a healthy lifestyle.   I eat well and I train everyday at the gym. I am still MD of the same company and work hard too.

I can honestly say that I forget that I have HIV at times; but there is one place I never forget: and that is in the bedroom. I have been engaged to my fiancé, Gavin (who is HIV-), for the past two and a half years, and I believe it is my responsibility to make sure we lead a healthy, safe, sex life.

My life has been a journey; I have visited the devil’s den and landed in the enchanted magical garden that is my life now.  I wrote a book, “Secrets Make You Sick” which tells about my journey.  It is graphic and can be shocking in places, but I wrote it because I hope to help people that are experiencing or have experienced life in a similar way.  I also believe my book will help the families and friends of people experimenting with drugs, or dealing with HIV to understand their situation better.

Things weren’t easy for a long time.  But I believe that everything I went through brought me to where I am today.  And I wouldn’t change that for anything.

Secrets Make You Sick is available at all Exclusive Book stores nation wide.  It is also available as well as in eBook format from Amazon http://www.amazon.com/Secrets-Make-Sick-Trevor-Kleinhans/dp/0620513691/ref=sr_1_1?s=books&ie=UTF8&qid=1338274618&sr=1-1 and through Smashwords https://www.smashwords.com/books/view/116982