You are here: Home › Heroes › Media › Other › Brad Whittingham
← For all those unsung Heroes …
“Well, when I found out that I was HIV positive I literally heard white noise roaring in my ears… → 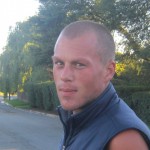 Well, when I found out that I was HIV positive I literally heard white noise roaring in my ears. I was alone, in a psychiatric ward and had absolutely no one to speak to. How did I get here?

My name is Brad Whittingham.  I am 24 years old. I am a recovering drug addict and I am living with HIV.

By the end of 2010 my life had turned into a spiralling ball of pain and destruction:  I was battling drug addiction and my will to carry on living was fading fast.  In January 2011 I decided to commit suicide.  My chosen method: a drug overdose.

Despite my best efforts to kill myself, my body fought fiercely for life.  But I was in bad shape.  At 6 feet tall, I weighed in at a meagre 62kgs and life was slowly seeping out through my veins. 12 years of drug abuse had taken its horrible toll.  I was admitted into a rehabilitation centre in Johannesburg on 10th Jan 2012. Telling my family that I was in rehab was awful.  I felt angry, ashamed and very sad: this was my doing. I had allowed my life to end up this way.

But I was there and I was determined this time:  today my new journey of self-discovery free from drugs had begun.

Withdrawing from drugs (including both heroin and crystal meth) is no picnic.  They control of your body and your mind.  Withdrawal is as bad as addiction – horribly painful.  During my stay at Westview, I was referred a government psychiatric hospital for observation and tests.  Four days later, without warning, without any counselling I was informed that I was HIV positive. My life as I had known it, was changed forever.  I felt numb.

Counsellors told me that my response to finding out my status wasn’t “normal”, but I think it was.  I was dealing with being in recovery and acknowledging my addiction.  Both were already traumatic.  So this was one more to deal with.  I knew that the things that had happened to me were no-one else’s responsibility but mine: they were due to my own lifestyle choices and bad decisions.  I had no choice but to man up and deal with the reality of my situation.

I also think that part of my reaction was because I was educated about HIV and knew it didn’t have to kill me.  So I didn’t entirely freak out and lose my mind.  I understood that HIV was a virus that meant it could not be cured.  So being HIV positive meant I had a chronic illness – but one that was survivable and manageable if I chose the correct lifestyle and took the medication.

A month later, I signed on for long-term drug rehabilitation program at the drug education council facility (D.E.C) in Noupoort,  Northern Cape.  I discovered while I was there, that my CD4 count had dropped from 511 to 350 in the space 30 days.  So I began taking ARVs.

Once I started ARV treatment my feelings towards HIV changed a little:  the side effects made me sick and I wanted to crawl up in a little ball under my duvet and cry.  And sometimes I did.  The side effects lasted a while; but every day I would promise myself:  “this too will pass” and remind myself that I must stay focused on the positive effects that the medicine would have for me …  these pills were going to save my life.  It is still a struggle sometimes; I won’t lie.  But when I get down or feel ill – I keep my eye on my ultimate goal, and call a friend to talk things through.

I also started to run.  I had met a great woman called Candy – whose story was similar to mine and she introduced me to the road.  Getting up at 4am, and running into the icy Karoo morning was tough:  but that first 12km run was incredible.  And I have never looked back.

Running has helped me with my rehab.  It gives me a great purpose every day and keeps me clean and sober.  It’s improved the way I look at life – and the way I feel.  My health has never been better.  What a joy, running is my life!

Finding out my status has given me a new understanding on how important, special and unique that life is.  What I know is this: HIV DOES NOT DEFINE WHO WE ARE.

But it brings it’s own lessons.  It teaches us that breaking through the stigma surrounding HIV, is winning half the battle.  It teaches us people living with HIV are the ones that need to inform, uplift and empower all those who are infected or affected by the virus.

I have a dream now too:  I want to run all the major marathons and trail runs in SA over the next two years.   I want to run as an openly positive person to destroy the stigma that surrounds HIV.  I am proof that HIV does not discriminate between race, age, sex or culture.   And I want to show that people living with HIV can do incredible things.  Whoever they are.

HIV does not have to be a death sentence – if anything, it is a second chance to live the life we always wanted to, to push ourselves beyond all normal boundaries of existence and to accomplish all those things we thought we never would.

And that’s exactly what I am going to do.