You are here: Home › Heroes › Nomasomi Limako
← Fashion Show 2011!
Where fashion and the environment meet → 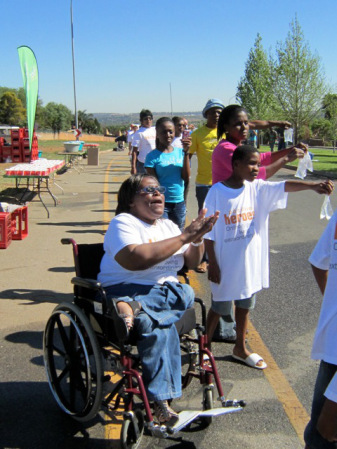 Nomasomi Limako, who lives in Gaugteng, has overcome more challenges than most in her 40 years. She has a disability, caused by polio. She says, “Growing up with a disability is a challenge because you experience many difficulties in life and you do not grow up. People will always treat you like a child.”

In 2000, Nomasomi learned that she was pregnant, which she describes as a ‘gift from God’. However, the impact of her pregnancy was that her boyfriend left her. “When I was pregnant my boyfriend broke up with me. He was ashamed of me because I have a disability, which is why he never introduced me to his family. He ran away, so I am a single parent.”

Nomasomi also discovered the stigma of being pregnant as a person with a disability. Health workers at the clinic questioned how she could be pregnant. “The nurses told me that a people with disabilities cannot have sex or become pregnant. They told me that I must have an abortion.” But Nomasomi fought to keep her twins, and refused all offers of an abortion. “On the 20th September 2000 I was blessed with twin boys, which was extraordinary for me because of my disability, and I carried them for the full term of nine months.”

In 2003, Nomasomi decided to take out a life cover policy, and was required to take an HIV test. She was shocked to find that it came back positive. “That was the beginning of the new chapter in my life now. At first I was depressed and I couldn’t tell anyone because of the myth that people have about people with disabilities loving sex. I thought that if I disclose to people they will say I love men.”

Nomasomi realised that she must find some support to help her come to terms with her HIV status. “I contacted NAPWA and went to my support group only to find that there was no one with a disability who I could share my fears with. I looked through the window, and I turned and went home again, because I knew that people would judge me because I have a disability.”

Those were dark times for Nomasomi. “I went to my corner, and went on being depressed alone. I was afraid to disclose to people, because they would say where did I get it, and some will look at me like I sleep around with men. But I was infected by one man who doesn’t have a disability and I did not sleep around. I couldn’t even tell my family who would think the same way, and the community would think I love sex and different men, and that is why I have HIV. But, I wondered if I love sex and men so much like people think I do, then why do the men not love me.”

Nomasomi works as a pharmacist, so she was aware that ARVs would help her to stay healthy. However, she was afraid that her colleagues would see her taking ARVs for herself, and she didn’t want stigma from her colleagues. She says, “having a disability is a stigma, but having HIV as well is a double stigma.” She felt desperately alone: “I met one person from MINDSET and he counselled me, and made sure that I understand the condition that I am in, so I started to look for people with disabilities who are living with HIV but I found no one.”

It took Nomasomi two years to come to terms with her status, and to realise that she must act to save her health. By this time she had contracted TB and her CD4 count had dropped to just 7. She started taking ARVs and her health began to improve. However, she was still unable to disclose to her mother, and told her that the medication she was taking was for high blood pressure.

In 2007, Nomasomi finally disclosed her HIV status to her mother, who found the news very difficult to accept. However, she has now come to terms with the HIV status of her daughter. Nomasomi disclosed her status to her sons last year, and was surprised at their different reactions. One son accepted her, saying “you are still my Mummy, and I still love you.” However the other son was very angry at his father, the man he had never known who infected his mother, but has now also accepted his mother’s HIV status.

Nomasomi is now open about her HIV status with everyone, including her colleagues at the pharmacy where she works. She says, “I can now talk about HIV at my workplace.” However, there continues to be a huge number of HIV positive people with disabilities who are frightened to be open about their status, because of the double stigma surrounding HIV and disability.

Nomasomi says there is still much education to do in communities who believe in the myth that disabled people like to sleep around. There is also a myth that is spreading which says that someone can cure their HIV by sleeping with a person with a disability. Nomasomi says that it is often hard for people with disabilities to negotiate safe sex. “Men see you as a woman with a disability and they see you as half a woman, who they can use. They are ashamed to be seen with you, and they will come only in the dark when they will not be seen.”

Nomasomi’s message for people with disabilities is this: “Don’t compromise your life – condomise! You must live your life, and do not be afraid to stand up for yourself.”